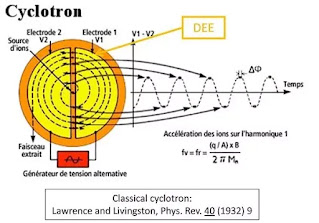 The cyclotron is a machine to accelerate charged particles or ions to high energies. Cyclotron was invented by E.O. Lawrence and M.S. Livingston in 1934 to investigate nuclear structure.
The cyclotron uses both electric and magnetic fields in combination to increase the energy of a charged particles. As the fields are perpendicular to each other they are called cross fields.
Cyclotron uses the fact that the frequency of revolution of the charged particle in a magnetic field is independent of its energy.
The particles moves most of the time inside two semicircular disc like metal containers, D1 and D2, which are called Dees as they look like the letter D.
Inside the metal boxes particle is shielded and is not acted on by the elected field.
The magnetic field, however, acts on the particle and makes it go round in a circular path inside a Dee.
Every time the particle moves from one dee to another it is acted upon by the electric field. Sign of the electric field is changed alternately in in tune with the circular motion of particle.
This ensures that the particle is always accelerated by the electric field. Each time the acceleration increases the energy of particle.
As energy increases the radius of circular path increases so the path is spiral one.
The whole assembly is evacuated to minimise collisions between the the ions and the air molecules. A high frequency alternating voltage applied to the Dees.
If positive ions or positively charged particle such as proton are released at the centre P, today moon in a semicircular path in one of the dees and arrived in the gap between the dees In a time interval T/2 ; where T is the period of revolution.

Thus frequency is called the cyclotron frequency for obvious reasons and denoted by Vc.

The frequency Va of the applied voltage is is adjusted so that the polarity of the Dees is reversed in a same time that it take ions to complete one half of the revolution.

The requirement Va = Vc is called the resonance condition. The phase of the supply I is adjusted so that when the positive ion arrived at the edge of D1, D2 is at a lower potential and the ions are accelerated across the gap.

Inside the Dees the particles travel in a region free of electric field. The increase in their Kinetic energy is qV each time they cross one Dee to another, it’s clear that the radius of their path goes on increasing each time their kinetic energy increases.

The ions repeatedly accelerated across the Dees until they have the required energy to have radius approximately that of the Dees. They are then deflected by a magnetic field and leave the system via an exit slit.

The operation of this cyclotron is based on the fact that time for one revolution of an ion is independent of its speed or radius of its Orbit.
Cyclotron is used to bombard nuclei with energetic particles, so accelerated by it, and study the resulting nuclear reactions.
Cyclotron is also used to implant ions in to solid and modify their properties or even synthesise new material.
It is used in hospitals to produce radioactive substance which can be used in treatment.

D1 and D2 are two metallic semicircular chamber place with some gap now teo field magnet N and S are placed such that magnetic field is perpendicular to the plane of there. High frequency alternating source is attached across the D1 and D2.
The entire appartus is placed inside a soft iron chamber in which gas is filled at low pressure.

When key K is switch on, high frequency source acts such that the D2  acquire the positive polarity and D1 acquires the negative polarity, due to this a very strong electric field is produced between the gap of Dees, as a result gas get ionized.
Time a positive charge produced at the centre.
Now, force on the charged particle due to electric field as a result the charged particle accelerates towards D1.
Now, this time the force on particle due to magnetic field provide the necessary centripetal force to the charge.
Here, the particle follows semi circular path.
Now, after following the semicircular path the polarity of Dees changes and particle accelerates again.  This time the velocity of particle increased and particle follows semi circular path of radius.
This process continuous and particle acquire a sufficiently large energy which is used to carry nuclear reaction.

What are the steps of nodule formation