Kalki avtar and when he will appear – explained 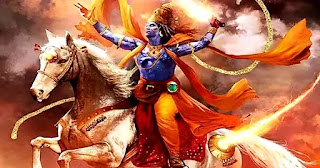 Kalki avtar is one of the dashaavtar of lord vishnu. Kalki avtar will appear at the end of kalyuga. He will born in shambhala, and ends all evils from world.
Let’s discuss more about kalki avtar.

Most ancient texts, including the very popular Kalchakra tantra, Tibetan culture, scripts, etc. Have mentioned the mysterious paradise of Shambhala.

This word is Sanskrit originated and means the peaceful place or place of silence. According to the great legends, the place is accessible to only people having pure heart.

The principle of love and wisdom govern the city and the people are free from suffering all worries. The place is labeled with so many names that it is often regarded as a land of thousand names.

Names for land of paradise

Some of the names delegates to this mysterious paradise are the land of fertile, land of radiant spirits, land of gods, the forbidden land and many more. Hindus commonly referred to this place as the Aryavarta.

Which means land of worthy ones, the Chinese call this as the high time, meaning the Western paradise of Hi Wang Mu and the Russian calls this place as the blue white.

Despite of so many names, Shambhala or Shangrila are the most popular names for the land of paradise, the origin of this land, or we can see the thought of the existence of this land can be traced back to the ancient scriptures.

Shambhala, as mentioned in the Buddhist text as well. It is an adaptation from the Hindu scriptures itself.

Kalchakra remain as the former source where Shambhala was described at first.

Who is kalki avtar ?

Kalki avtar is the final incarnation of Lord Vishnu in ancient Hindu scriptures, Shambhala is set to be called his birthplace.

Shambhala is a mythical paradise that is constantly spoken in ancient Hindu scriptures, including culture and ancient writing, such as the changing culture which spread Buddhism in western Tibet. The word has a Sanskrit root which meets place of peace or place of silence

The legend says that only people with pure heart can live in the place with love and wisdom are the rulers. It is believed that Kalki appears at the end of Kalyug.

Kalki avtar at the end of

According to the Hindu scriptures, universal time is composed of four main periods or yugas.

Human beings are currently living in the clear period, which lasts approximately 432000 years. This period began after the battle of kurukshetra at the end of King Parikshit region some 5000 years ago.

Therefore, approximately four hundred twenty seven thousand years of Kalyuga remain before it is said that Kalki avtar will come.

Purans predict that Kalki avtar will be on a winged white horse and irradiance what it is believed that kalki avtar will cause the destruction of the world when humanity completely abandons moral, when nothing is known about sacrifice techniques, even in words

Kalki avtar mission is to restore justice and good principles which disappeared at the end of kalyuga. The old age of hypocrisy and struggle at the end of kalyuga the population of the whole world will be soon reduced to minimum that there will be no more power to understand what dharma or adharma is, and it’s already there kalyuga.

People will not have the power to understand philosophy consciousness. Then at that time, when there are no more good principles, no humanity left, then there is no alternative.

At that moment, kalki avtar will arrive and he will take a sword on horseback. He will simply continue to kill all these evil and adharmic creatures and mark the beginning of another satyuga.

The Golden Age of Righteousness and Truth.

Kalki avtar will worshipped as

Nostradamus was a great french astrologer and whatever he had predicted had always come true.

According to his prediction, it was discovered that a possible bear with immense power in the world whose holy day will be Thursday and will rule throughout the world, both of land and sea.

He will be the only person who will free the world from all problems. According to Nostradamus, this great person will come down from his throne and will move to the sea and air for striking the evil ones with his sword.

According to bhagavad gita Kalki avtar has many similarities to what Nostradamus had predicted. Bhagavad gita also says that lord vishnu will appear on the world as kalki avtar at the end of the kalyuga and finish all the evils and problem in this world.

Problems and why kalki avtar

Who would not agree that the Earth has undergone extraordinary deterioration of its biosphere? Who could argue that living a pure life on earth becomes more difficult and challenging with each passing year?

Who has not shouted about social degeneration and political turmoil, financial chaos and feed and suffering caused by endless wars?

Leaving aside each statement, counter declaration and argument about the predictions and prophecies about kalki avtar, we really wish he is out there somewhere.

Kalki avtar will come and help this world.

Thank you for reading

This experiment proves that co2 is necessary for photosynthesis